Black & White About a Hometown 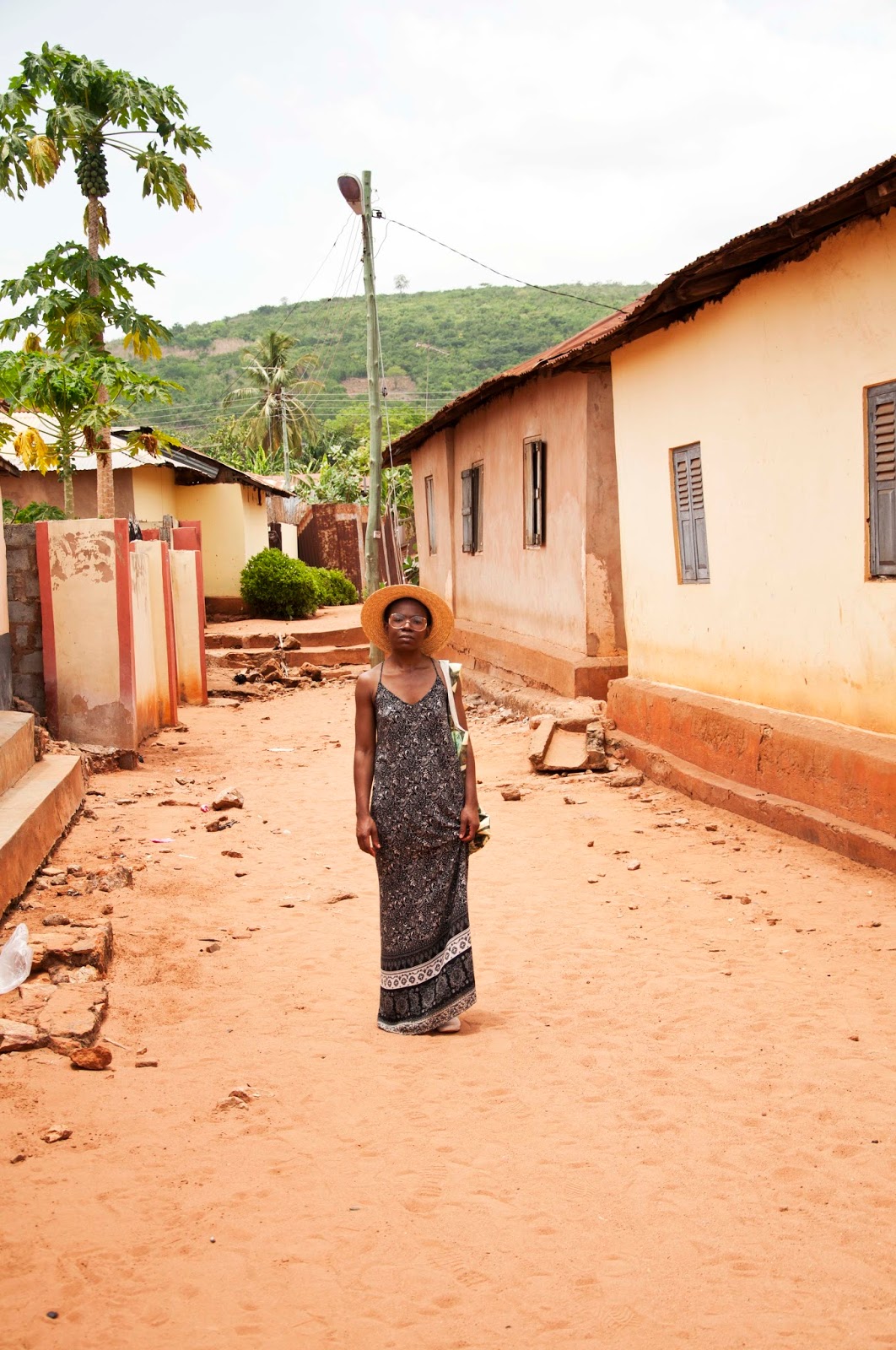 I travel light and the trip home to Ghana for Grandma's funeral was no exception. I brought few clothes appropriate for the scorching sun: pieces that would work well in day or night; would hand-wash easily and dry fast. This maxi dress worked great for it required little care, no ironing! and fitted well enough. I would say it was almost all I wore the days before and after the four-day funeral ceremony.

The last time I visited my hometown was almost two decades ago, when I went for Nana’s birthday party. After the funeral ceremony my brother and I walked through the town to see how it had changed since we were last there, and to see what memories would yield to us. In our family home, an aunt showed us some photos of when we were around three-four years old. It felt surreal. In one photo I was clutching a doll by the head and smiling cheerfully into the camera. Although I had initially forgotten that doll, suddenly I could recall it and how I used to try to draw it. I also remembered the skirt I was wearing in that photo; I remembered how I liked rubbing it between my thumb and middle fingers to feel its gritty texture and sound, and chew on it to extract its taste.

In this present photo taken by my brother, I am standing in the path that run behind our family home. The first yellow house with its back to me, to the right. I have run and walked down this path so often to school, to church, to... There used to be a huge mango tree in the house with the pawpaw trees behind me to the left, right before the climb. When we were children, the compound of that house had tall, rusting aluminum roofing sheets for fence, and big orange and mango trees grew out of it, mysteriously partitioning its contents from our prying eyes. The older children told frightful tales about the people who lived there and we were very careful to not walk too near it when alone. Yet in little groups we would go and steal the delicious mangos from the trees when they were ripe, stoning them until they fell down into our eager little hands then run home quickly, with fear barking at our heels, to wash and eat them.

A few yards in front of me, outside the photo's frame, after another climb down,––the village, rooted in a mountainous area, traveling through it is always a matter of climbing up or down––used to be where Mother’s little thatched-roof tent provision store stood. To the right of the tent was the alley where my friends and I played Ampe; jumping up into the air screaming Occonto! Ostraigti!

If one climbed down again, a little to the front of mother’s store, there grew a big lemon grass tea and basil plants that Nana grew...or was it Mother who grew them? I remember, though, that Nana guarded them jealously from our neighbors and the goats. We were responsible, as was everyone, for keeping the goats away from these plants, as well as from Mother's okro garden which grew on a higher elevation to the left of the store. The goats were quite a challenge. It seemed nothing ever got through to them. They took naps, played, and walked lazily about the place as though they owned it; going wherever they wished, and very often to where they were not wanted. Yet no matter what we threw at them they always looked at us in this careless adoring manner. And no matter how many times we sack them away from the plants they always came back bleating sweetly and eager to eat the leaves.

There was a song we used to teach to those who could not speak Krobo and made the mistake to ask us for lessons. We would make them sing after us:

We taught this song out of the hearing of adults for when we were heard by them, we got spanked and reported to our parents who gave more beatings and forced us to take naps.

One leaves the body behind, so I suppose personal style does not continue with the soul, although one can make an argument that personal style, i.e. individuality is inherent, as there are things one seems to bring into the world rather than the world's affect on one. So one wonders what one takes into death. When the body is shed, what does the soul carry? Does it retain anything from our years as matter? I like to believe that it does. As has been written in some of our great works of literature.