Summer Diary: Queuing for Shakespeare in the Park

June 16, 2016
Last summer I came up with a summer to do list owing to lack of motivation to do anything that required leaving home. The idea was that the list would force me to get out more and not spend the entire summer working on my small handmade business which was really all I wanted to do. But this summer I feel differently and have been leaving things to happen more naturally. Summer started the day after graduation––it may not have the blessing of the calendar year but that is alright. So far, I have been riding on the side of amazing luck. Tell me it is not lucky to have seen three plays for free; just when I was about to start groaning about how life, so unfair, would not allow me! to see a little play now and if not then, to oh-and-ah, laugh a little, and maybe cry a little for the reflected self in the cast. Then before I knew it I was seeing all these plays and was like, oh woman! But I want to tell you about my little thing with Shakespeare in the Park.

What I love most about the Public Theater event in Central Park is the mental effect it has on me. As of two years ago, I had been wanting to queue for tickets but the more I thought of it the lazier I got. To make it, I would have to wake up at least by 5am, be out of the house by 5:30am, and make it to Central Park by 6:30am. For someone who loves to retire to bed around 4am, the idea of waking up at 5am was too unkind. It meant that I would have to change my sleep cycle for at least 48 hours. Of course, I was not motivated. Then I dared myself to do it, if only to find out if I had what it took. And that is how two summers ago, I started my little Shakespeare in the Park tradition. I remember the first time I got my tickets, it felt like I had won some excellent award; it still feels like that. The first time, it rained the evening of the performance and the play was cancelled. But my feelings on the cancellation brought the suspicion that the point had not really been about seeing the play but the experience of getting the tickets. Last year I saw two Shakespeare in the Park plays although I queued only once––a friend hooked me up for one play, and for tickets to the other one, I queued at Queens Museum, only a half-hour walk from home. It felt too easy. 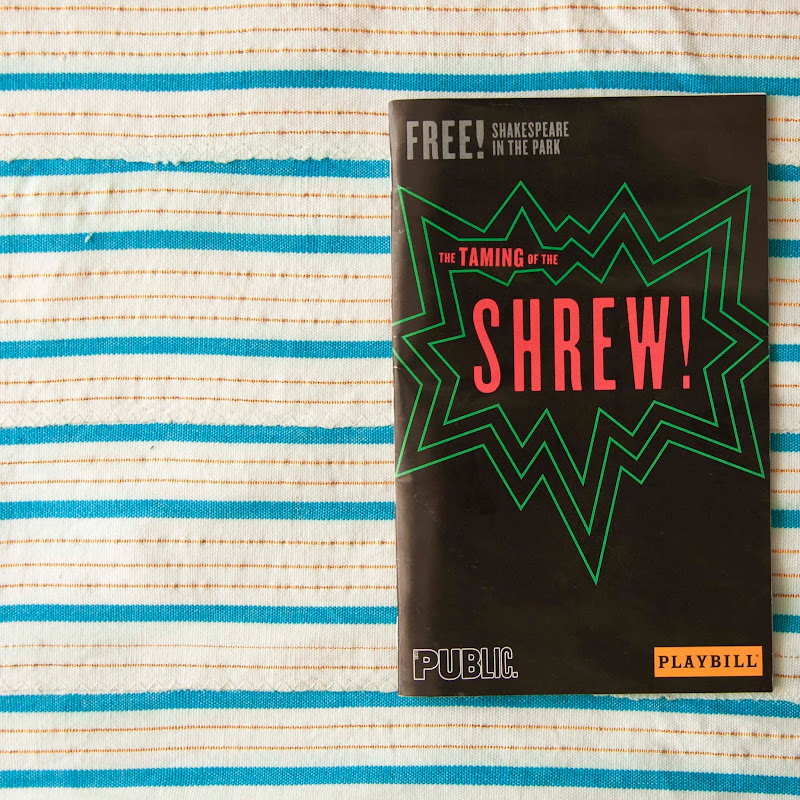 This year I was curious if I still could manage the Central Park experience. I thought it should be easier since my sleeping schedule had drastically changed and I am often up at dawn. Knowing something to be possible and actually acting it out is two different things, so I was curious if my knowledge equalled my ability. Thinking about doing it was again the hardest part. My imagination
dramatized everything and made it feel as though it was more difficult than it actually would be. Interestingly, I was not disturbed by thoughts of a bad weather resulting in a cancellation of the play. This confirmed my suspicion that I loved more the process of getting the ticket than the reward of seeing the performance. This was my thinking: I know I can do this because I have done it before, but will I be able to do it all the same? The Wednesday past was chosen for my little queuing adventure since I was not sharing the majority of it with anyone or activity. I remained very curious up until the dawn of day, about whether or not I would actually leave the house for the park. When the time came to get up, my treacherous bed felt so good, but courage came from within. I have been waking up at dawn for a couple of months now for work, if I can do that for work, I should be able to do it for fun. With this thought I managed to untangle myself from those loving sheets and get dressed for the little adventure.  I was excited. I packed a bowl of fruits, brought a knitting project and two books, for it was going to be more than a five hour wait.

Well, I made it. It was super cold and I had to keep running out of the line to stand in the sun every now and then, but there was no one policing the queue and I did not get into trouble. I finished knitting the yarn I brought with me while my ears participated in my neighbors' conversations. At one point these two elderly ladies, who were walking their dogs, stopped to admire my knitting. I had not realized they were  doing this until one answered the other, rather loudly, that I was knitting in the European style. I looked up quickly, tuning out my neighbors and giving the women my full attention. They said I knitted beautifully, and my face lit up as my head grew too big for my poor neck. It was harder to read because of all the talking and the cold.

Right when we were about to be given our tickets it started to rain, and for some unknown reason I felt so happy right then and there, as the drops fell on my hair and shoulders.