April 29, 2015
To read a novel and identify so easily and relate so often is for me a rare experience. This made it somewhat agonizing to put down Chimamanda Ngozi Adichie's Americanah even for food and rest. It was an affirmation of observations and feelings that I thought alien to everyone but me. Ifemsco was for that matter very relevant. Where she is coming from is familiar. Her experiences in Nigeria prior to the United States, in the States, and as a returnee resonated with me.  For instance, I found the ceremony of nicknaming most precious. So it made me chuckle, quite loudly, and in public, too, when Ginika meets Ifemelu for the first time after years apart and calls her Ifemsco! Yes. Finally a book that appreciates that initiation of students into their new family of school mates. I was beginning to think it was an exclusive Ghanaian school tradition. In junior school, for example, I was "With a Gun." Due to an answer I gave in my English class. Till this day, when I encounter mates from my junior high school days they call me "With a Gun!" And it takes me back to a specific place in time which would have been mundane and forgotten except that it gained me a nickname. To my surprise I would learn in Americanah some aspects of the immigrant experience that were unfamiliar to me. For instance, I was not aware that the deported person is treated as a criminal. I assumed they were allowed to go home, pack a bag and report to the airport where they were then taken back to their country on some sort of federal funded flight. I was shocked by the humiliation that Ceiling had to endure. At first it saddened me then it angered me. Though Americanah consists of many interesting themes, I will focus here on Ifemelu's desire to give up America for Nigeria.

Too often I have heard people say, "if you don't like it go back to Africa!" As though it is not at all complicated. As though the majority have somehow forgotten that America is the land of immigrants. Is it not the place where so many came to escape certain hardships and to practice certain values and religion freely? If America belonged to any one group of people it would be the Native Americans, from them, the phrase go back home would make sense. But it is not about going back to Nigeria where the problem is. It is in the need to abandon Nigeria or Ghana or Senegal not even for Cameroon or Kenya or Madagascar but for America or the United Kingdom or France. Why is that? The Western world has a severe hand in why Africans leave Africa to seek refuge in Europe and the Americas.  Even though it seems ignorant of this. Some of my fellow Americans would not understand my saying that the West owes a lot to Africa. Though Africa, as noted by Ifemelu in her discussions with others, realizes soon that the continent's position in the mindset of most Americans is that of a savage place and a charity case. The conversation around Africa is often about what should be done for the poor poor inhabitants of a rather backward place. It sounds as though all efforts and money is being poured into the place, yet nothing good comes from it. A barren land.

But if Ifemelu could have gone to university without the interruption of strikes, if she could graduate college and easily get employment, the novel suggests that she would not have left Nigeria for America. It was the instability of a place that had been forced to catch up in a game which rules are unfamiliar to it——a place so young to some of the ideas that the West deems common sense, that drove Ifemelu from Nigeria and made America the dream land for Obinze. 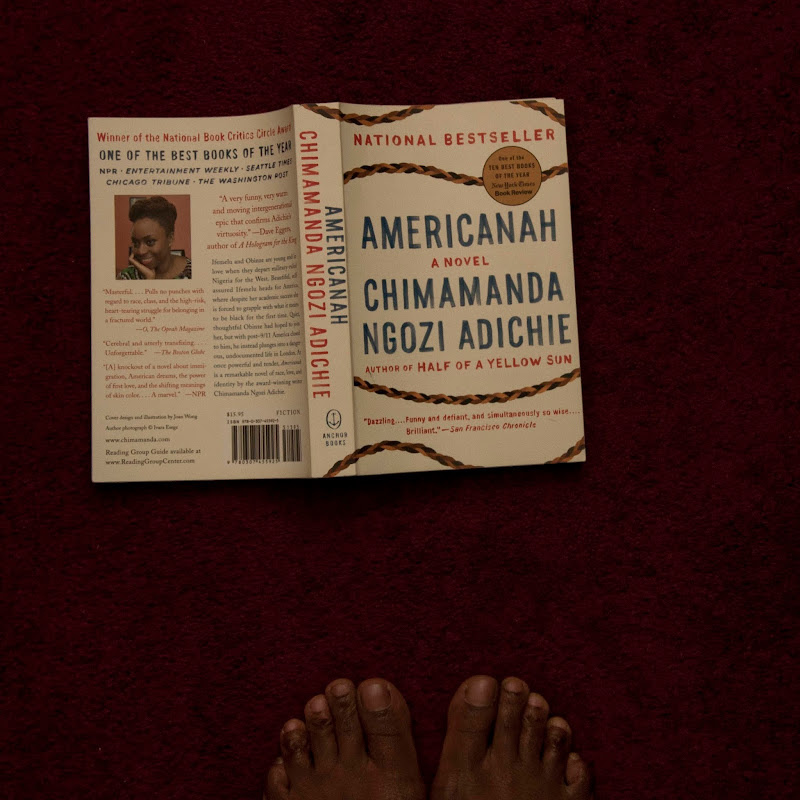 The need to be better, to not have to entertain poverty for an entire lifetime is the reason why she would apply to come to the Unites States to study. It is probably why Aisha, Ifemelu's hair braider with her skin rashes, gave up Senegal for America, too. To have a "normal" life.  So though in the beginning life was difficult for Ifemelu, as it was for Aunty Uju who had three jobs and was studying to become a Doctor, it made sense that once she found her feet, the normalcy she was after, Ifemelu's mind would return home to Nigeria. Even though she was by then an American citizen, she did not feel that sense of belonging.  Probably because she came to America when she was already old, old enough to notice the psychological differences. She notices when she slips into the role of the other in her society; those whom when spoken of, one must attached the adjective beautiful. Defensively. Her hardships in America, albeit different from what she experienced in Nigeria, would give her a different perspective of what role she filled outside her home country. Ifemelu is able to grasp how her home country is perceived outside itself and she could compare it to how it saw itself, because she had that knowledge.  Ifemelu's choice to return home despite her success is, therefore, a response to a need for something that America is not yet ready to give her: a sense of belonging necessary for a sense of self. After all, in  the streets of Nigeria the question would not be where are you from, insinuating that one does not belong, something some take offense to. For in how Ifemelu looks, the language she speaks, and even her name, where she is from would be often evident.

Despite difficulties in Nigeria, racism would not be a problem encountered by Ifemelu. Yes, there are ethnic rivalry and quarrels but it is often a part of the culture.  So that in selling his land, Obinze's client would talk freely about what he believes differentiate the Igbo people and the Yoruba people; indirectly accusing Obinze of not being as brotherly as the Yorubas are to one other. To this Obinze would not take offense, he would have known how to answer, how to tease back, and it would go back and forth until they reached a price point that they were both happy with. But when Obinze gives in to his client without the traditional squabble, because his mind is elsewhere, his client is surprised. To return home, when one is already immersed in the Western experience and can find comfort in it, is to want more than the West can give. It is not about money or success, so it must be for an intrinsic value, which I believe to be the sense of self and a need to do something to improve the conditions of one's root. Dike's surprise at seeing so many black people in the same place was how I felt when I first came to America; seeing so many white people in the same place. When Dike says to Ifemelu, "I kind of like it here," it makes sense. In Nigeria, Dike gets the opportunity to be just Dike. Not a black boy, or a threat because of his skin color, or the only black boy in the room. He gets to be Dike. A teenage boy.

Ghanaians like Nigerians are known to be very patriotic people. Even I, whom have never really felt at home in Ghana, have a Ghanaian flag hidden somewhere.  And yet it took my coming to America to becoming an even more patriotic Ghanaian and African. Prior to the USA, I cannot recall thinking of myself as African. I was Ghanaian sometimes but mostly I was a Krobo girl, embarrassed of some of  the traditions of my people. Seeing the negativity directed to and made as a representation of a continent that holds much meaning to me, and of which I know to be in the possession of immense talent and promise, makes me want to do everything in my power to help it reach its potential. Yes, it is a big place but so is its heart and its ability to keep getting up when it falls on its face. I sense in  Ifemelu's need to return to Nigeria the zeal to do what she can for her fellow Nigerians.  To somehow help and prevent a fellow country person from suffering the humiliations that she had to endure to earn that first $100 for rent.