February 04, 2015
The feeling of late is that there is not enough time to see things properly through.  It is like the morning comes along with the night.  I look up from a project  I feel I had been sitting with for mere minutes only to learn that it had taken a whole day.  I am trying, though, to not neglect my reading; despite my inability to make time slow to a pace of my own.  This week, I am taking trips into the world of William Faulkner's The Sound and the Fury.  My first Faulkner was Absalom, Absalom!  It was for a class in my grad school program.  My professor, a beautiful soul with a wicked sense of humor, said to us, I want to introduce you to some good authors, so you may find some new favorites.

Absalom was a hard read, but it still did not prepare me for The Sound and the Fury.  I was extremely confused for about the first twenty pages in, then the language started becoming familiar and the book more interesting.  I am within the second chapter, "June Second, 1910."  I have left Benjy's thoughts for Quentin's and I am transfixed by the allusions to incest, "I hushed and Dilsey turned back the spread and Caddy got in between the spread and the blanket.  She didn't take off her bathrobe"... She snuggled her head beside mine on the pillow...Caddy smelled like trees".  This is one of the scenes where I felt a suggestion of incest in Benjy's relationship with Caddy. That he had to say "she didn't take off her bathrobe" hints something.  But now it seems I am to wonder if the incest is with Quentin, rather.  For instance, within his thoughts are these phrases, "Roses.  Not virgins like dogwood, milkweed.  I said I have committed incest,  Father I said. Roses."  But the answer, I suppose,  lies in who said it and to whom it was said to.   Though if it was Caddy saying it to her father, then it is simply to whom with.  With Faulkner, it is hard to say "foreshadow," because for all one knows, it had already happened, or never happened in the way one assumes. 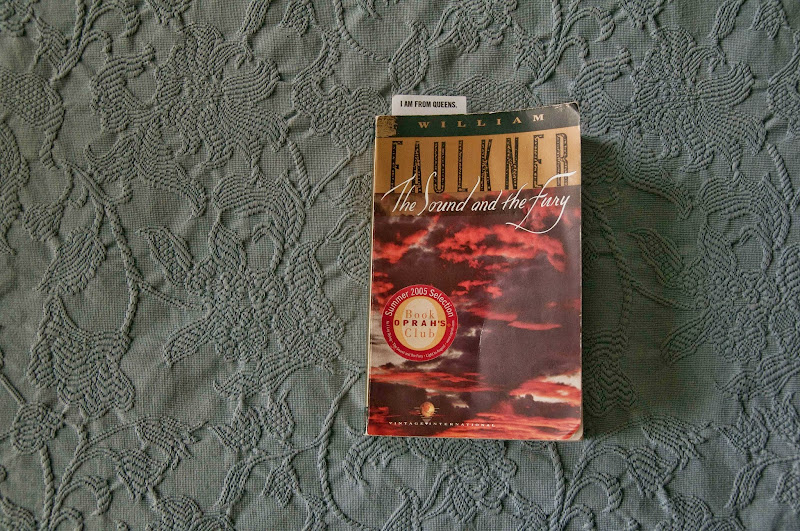 Quentin is having a conversation with Caddy.  Herbert has just walked out of the room at Caddy's  demand.  I am not sure when this is in the timeline of the book.  If it is prior to meeting Quentin on campus or afterwards.  I am arrested by the language, the disregard of time and its marriage to the present, past, and future.  The lack of punctuation  for  several pages, then back to punctuating.  Putting more emphasize on language.  Who said what is often illusive; even when one is attentive.  Right now it seems Herbert is hiding something from the Compsons and Caddy.  Quentin says he would not let the cat out of the sack to his parents, but he makes no promises about doing the same with Caddy.  To this Herbert says, "dont let Quentin do anything he cant finish oh by the way did I tell Quentin the story about the man's parrot and what happened to it a sad story remind me of that  think of it yourself." An indirect threat Herbert makes to Quentin, as he takes his leave to give them the privacy Caddy had demanded.  But I wonder if I should not read more into "dont let Quentin do anything he cant finish."

The repetition of shadow is obviously a motif, as it is never too far away.  Even the repetition of "Father said" and phrases about time suggests living within the silhouette of others and things.  I am transfixed by these allusions and inquisitive of their meaning, like,  in Quentine's talk to Herbert, the shadow seems to be Herbert's secret.  (I do wonder about his name "Her - bert." I wonder if it is a pun for Caddy's choice.)  With Benjy, the shadow motif accompanies that of fire and reflections.  But fire creates shadows, and reflections are, in a sense, shadows within shadows.  There is something about Benjy's inability to talk that keeps me thinking he has profound knowledge of all that goes on in the Compson's household.  The allusions to rain in regards to Mr. Compson, and trees in regards to Caddy, I find also compelling.  What is going on within this family?  I am still mulling over it and I have more than half of the book to finish.  So hopefully I will have a better understanding at the end. Or not.

What are you reading? Have you read The Sound and the Fury? Do you like Faulkner?

Have a blast!
Jane
Books