Art: The Love Within an Exhibition by Lynette Yiadom-Boakye at The Jack Shainman Gallery 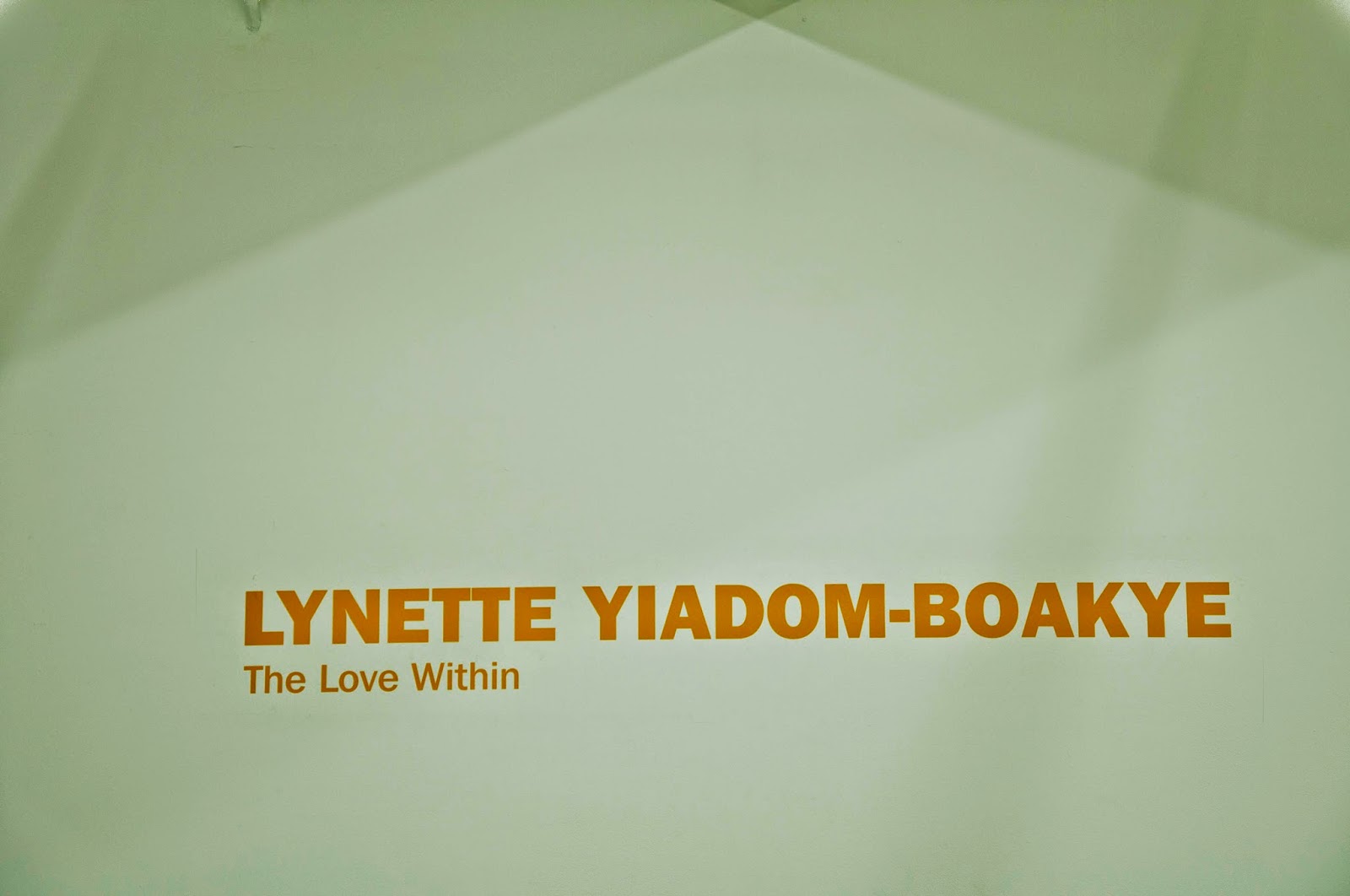 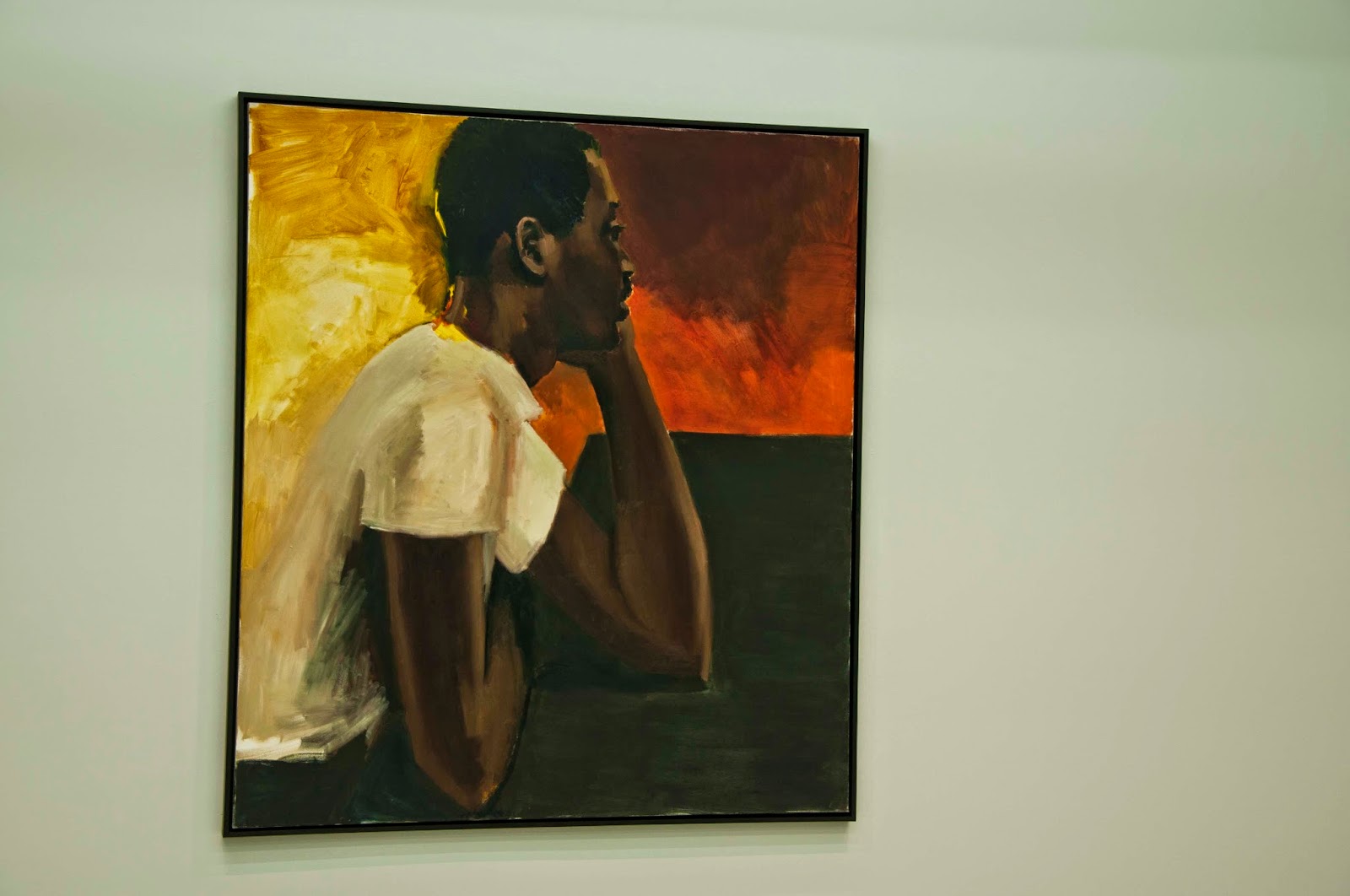 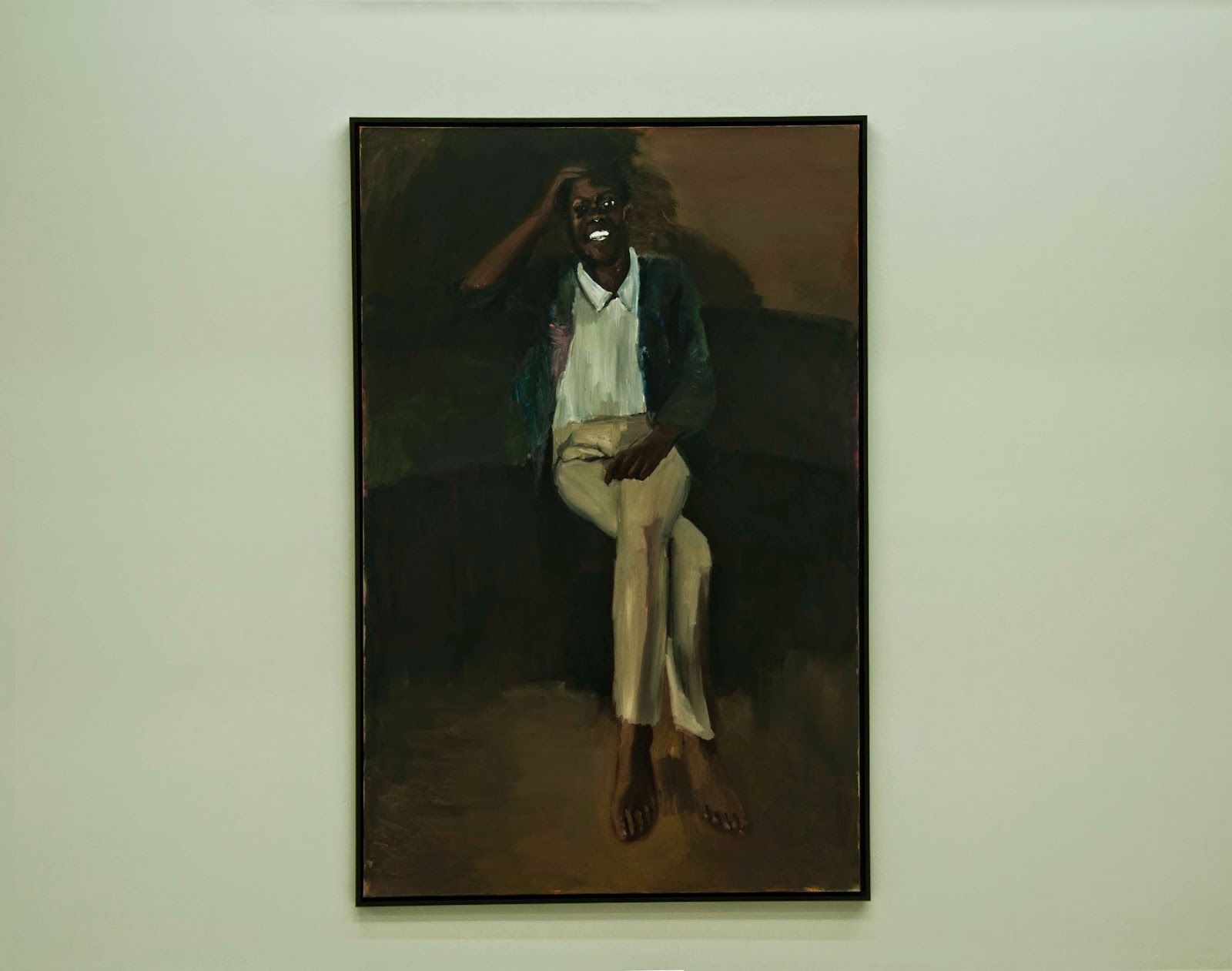 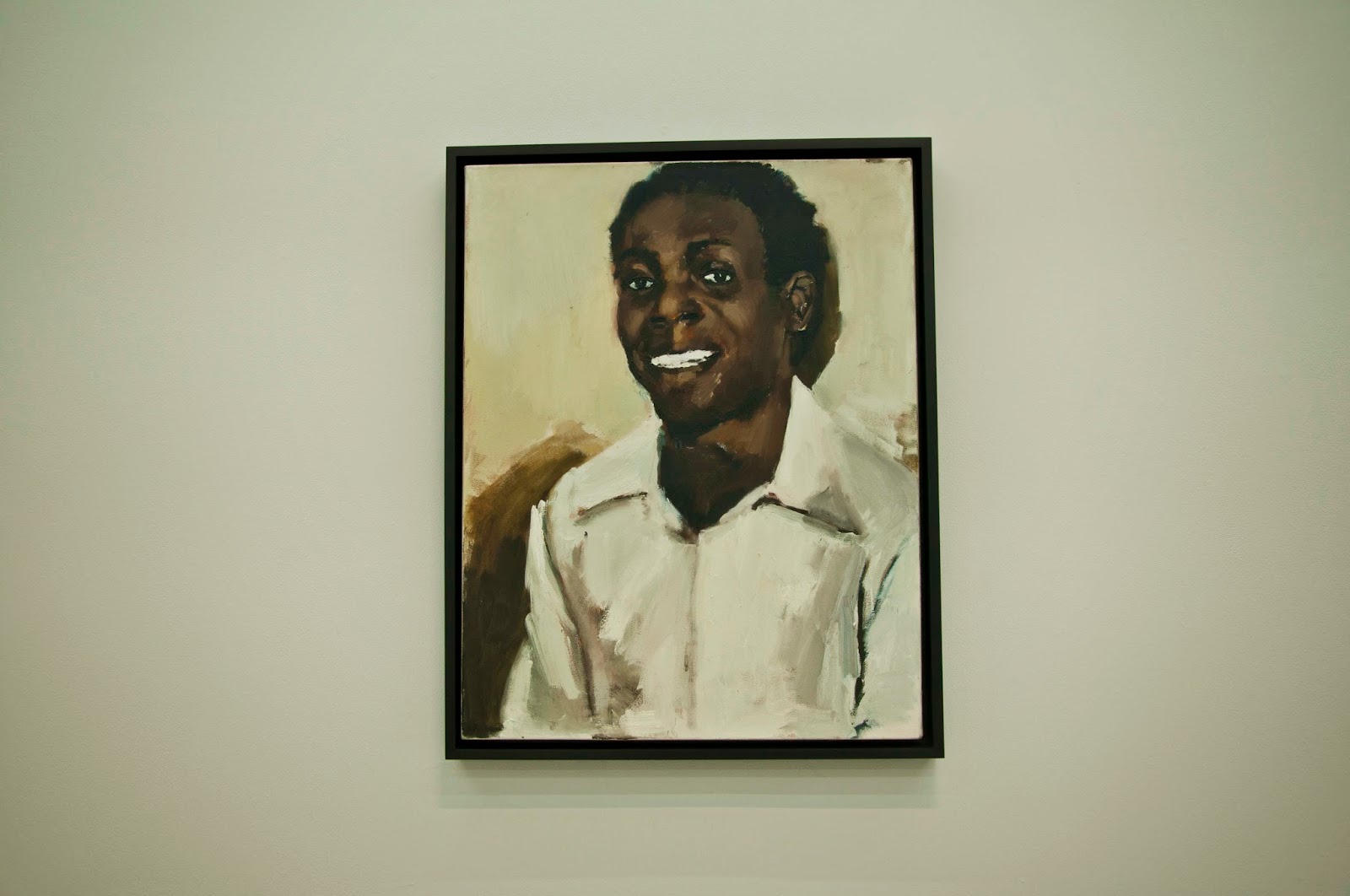 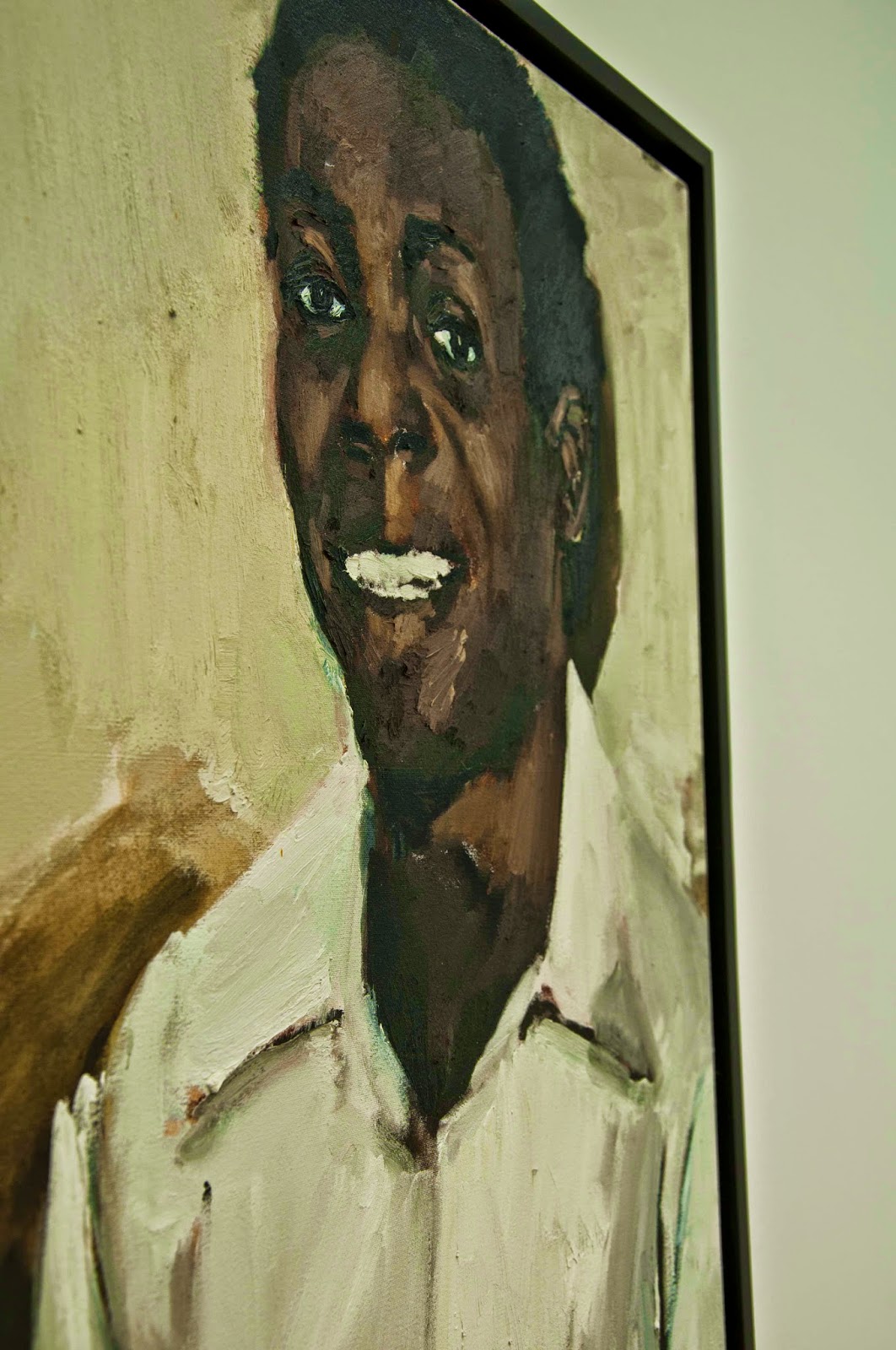 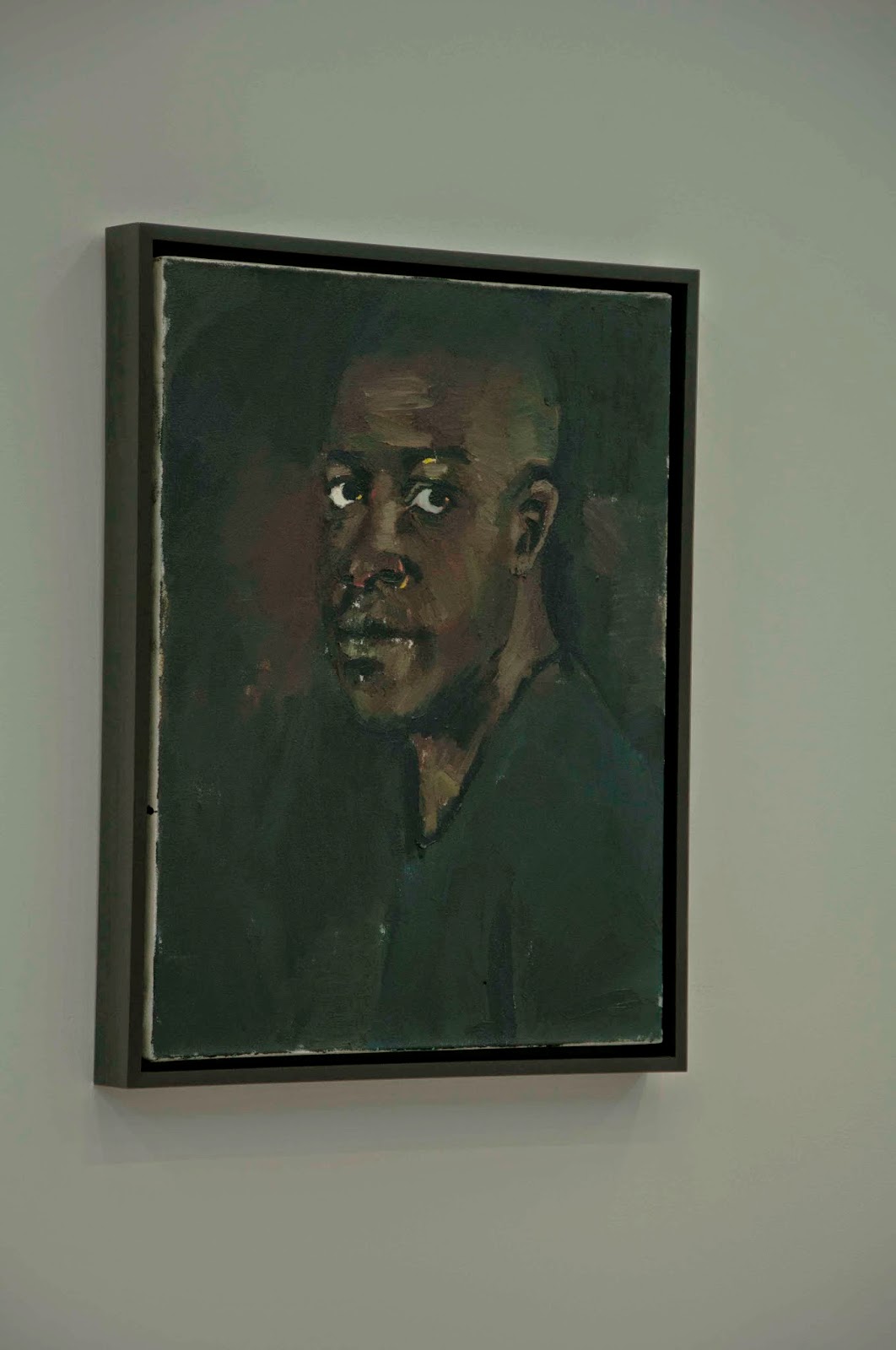 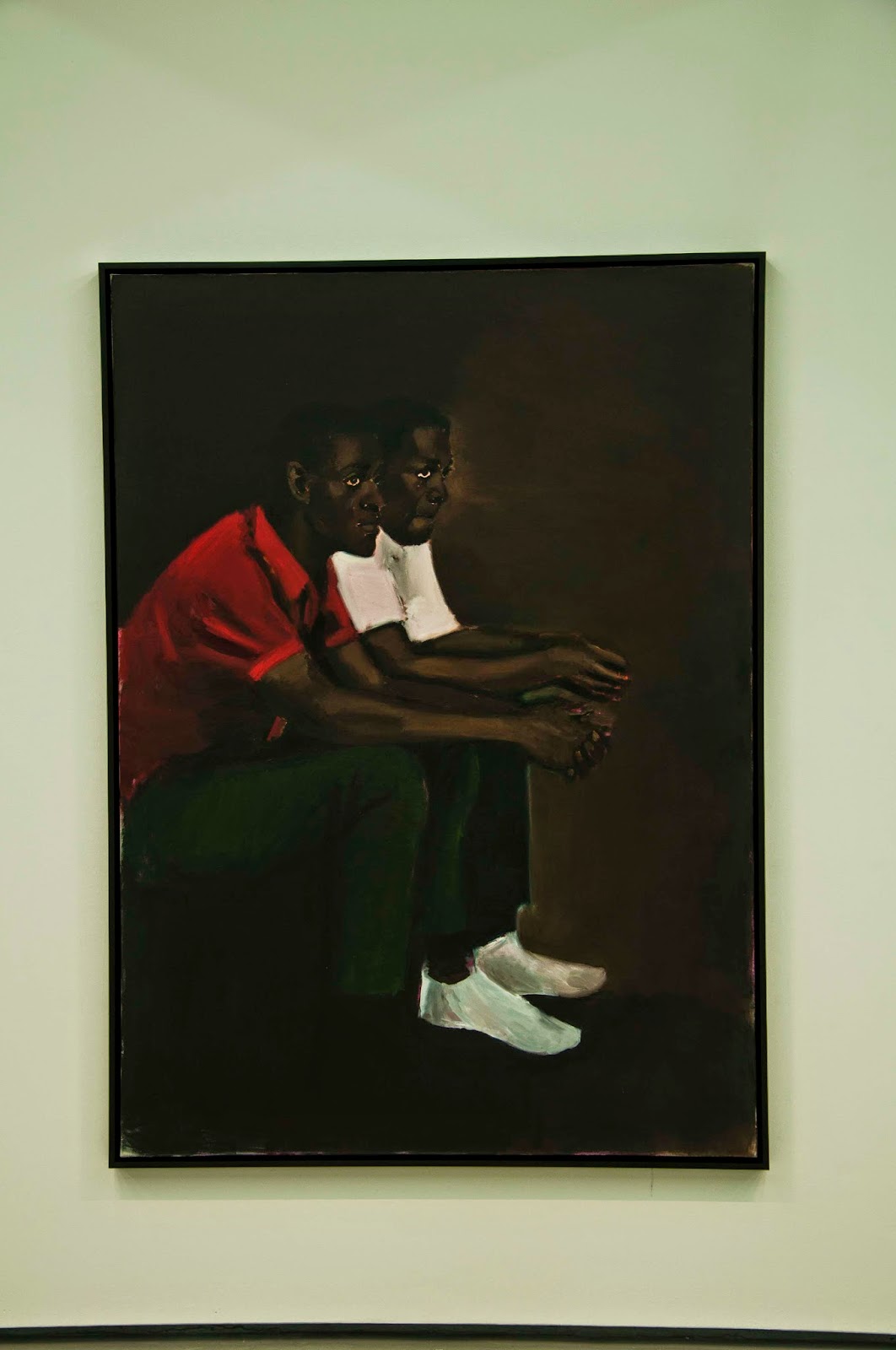 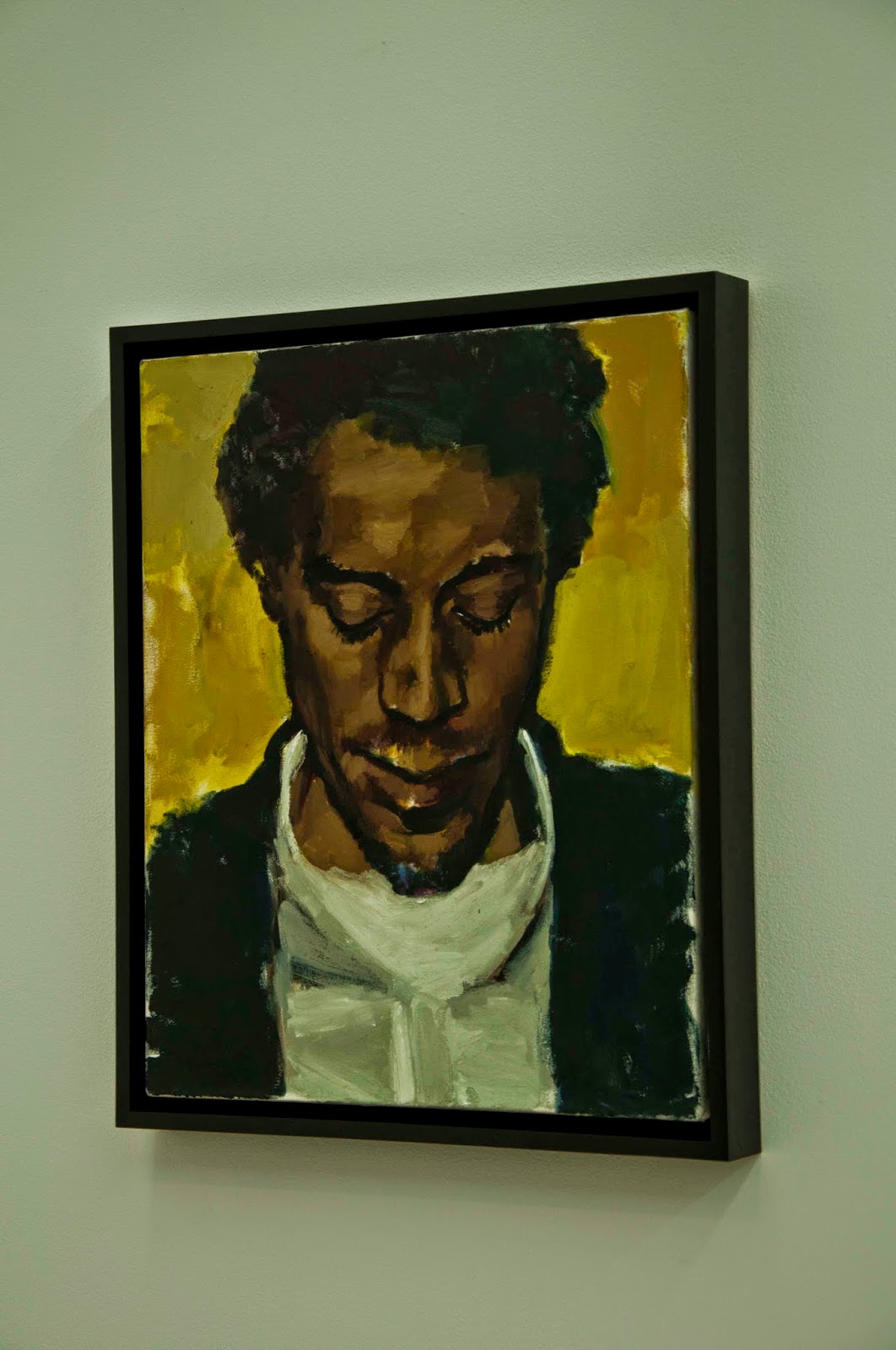 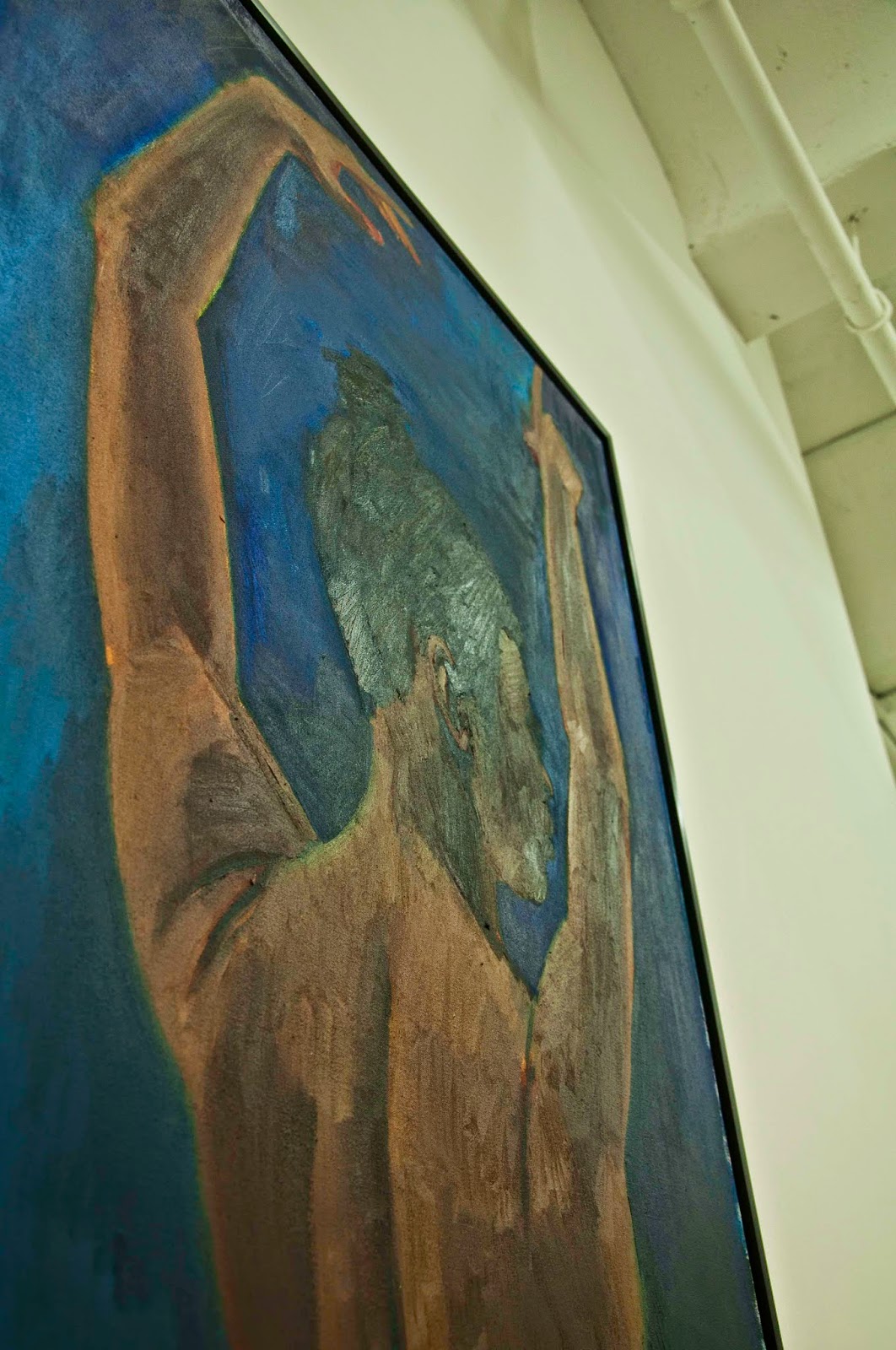 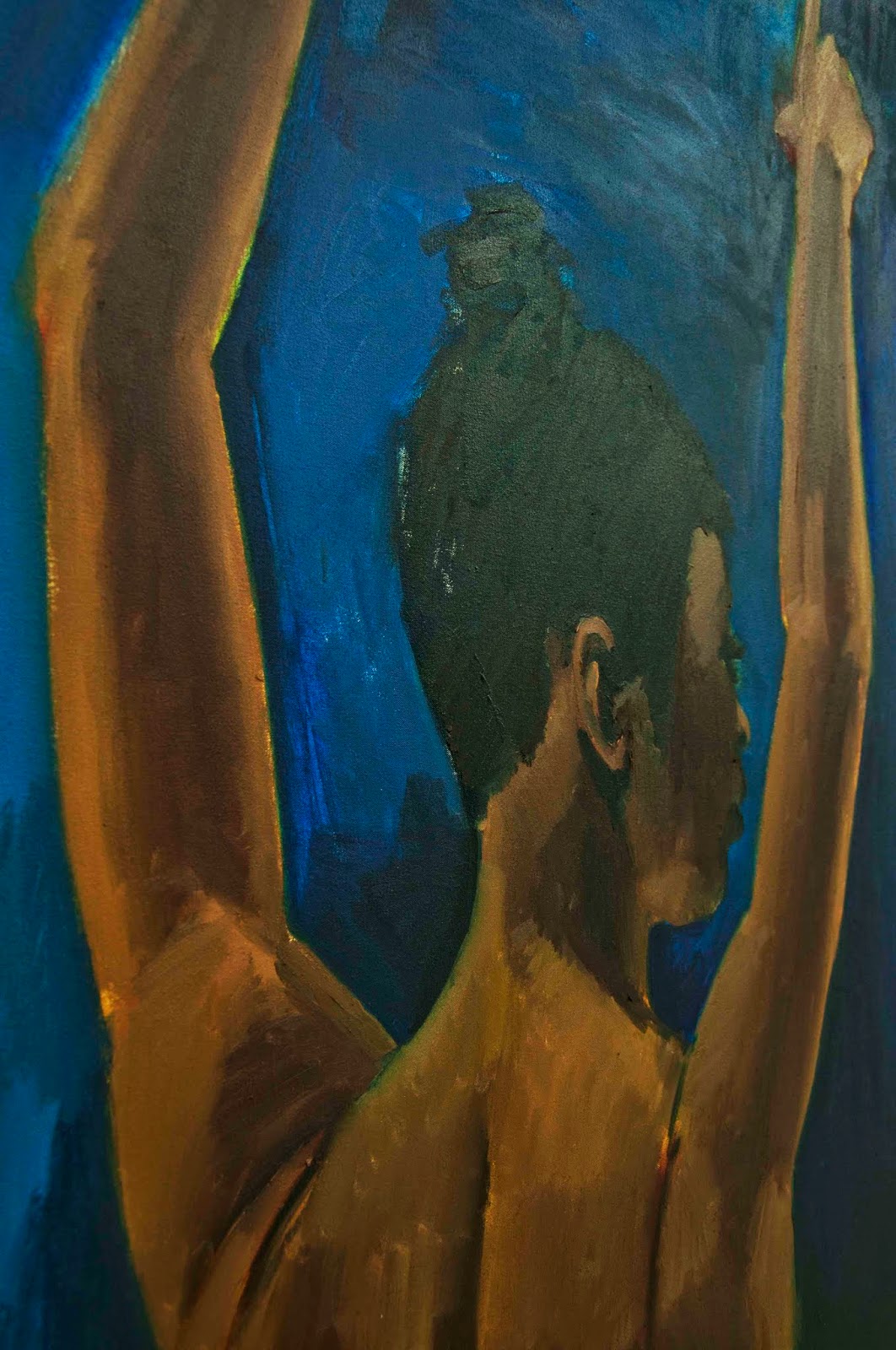 We braved the snow/rain, Esi and I, and met at the Jack Shainman Gallery in Chelsea for Yiadom-Boakye's exhibition, The Love Within, which opened on Nov. 21st and is scheduled to close on the 10th of January. It was Esi's idea, but what made me the most eager to attend is the artist's last name. She is Ghanaian. It is a good feeling to walk into a solo exhibition of your country's person; especially since it is so rare to do so.

Examining the paintings closely showed daps  and smudges of dried oil paints on canvases. Their motion and forms were purposeful, emotional, and seemingly abstract.  But examination of the paintings from a distance revealed clear subjects with expressive emotions. One subject in a white collar button-up shirt, charcoal cardigan, and beige pants exudes comfort as he sits with legs loosely crossed, his right hand supported by the sofa on which he sits which in turn extends up, gently,  and supports his head in his palm. His relaxed fingers are closely sprayed on his head and on his face a warm, comforting smile draws the observer's eye. I spotted one subject in thought, with his back to the painter, or is it the viewer? All the painted subjects in The Love Within, with the exception of Yiadom-Boakye's self portrait, seem unconscious of the observers gaze, or too familiar with it to be uncomfortable. They are fully active in the grasp of their own emotions.

Though not all the paintings are larger than life, they all exert that idea of being bigger than their frames. The subjects enter their frames with parts of their bodies outside it. They seem to have more to tell than what the frame can support. For instance, in one painting where two men sit next to each other looking away into a distance unknown to the observer, although the majority of their form is shown, part of it is outside the frame and some of that which is present is obscured by the background. Though they seem approachable, they also seem to be occupying a world of their own, of which the background seems very much a part of.

In photography, it is often difficult to separate darker subjects from a background of the same hue. I was impressed that many of Yiadom-Boakye's subjects shared a similar colors with their background and still managed to stand apart from them. The darker backgrounds are comforting, accepting, encouraging. In one of the few paintings where the background was white and seemingly harsh, the subject's white button-up shirt and radiant expression matched the brightness of his space. I wonder what Yiadom-Boakye means with her backgrounds because I suspect them to contain messages. I was amused to see how white the eyes and teeth stood out in her paintings but also noticed that they did not have that only-way-to-be-found-in-the-dark look that the camera often depicts the darker subject  on an equally darker background. 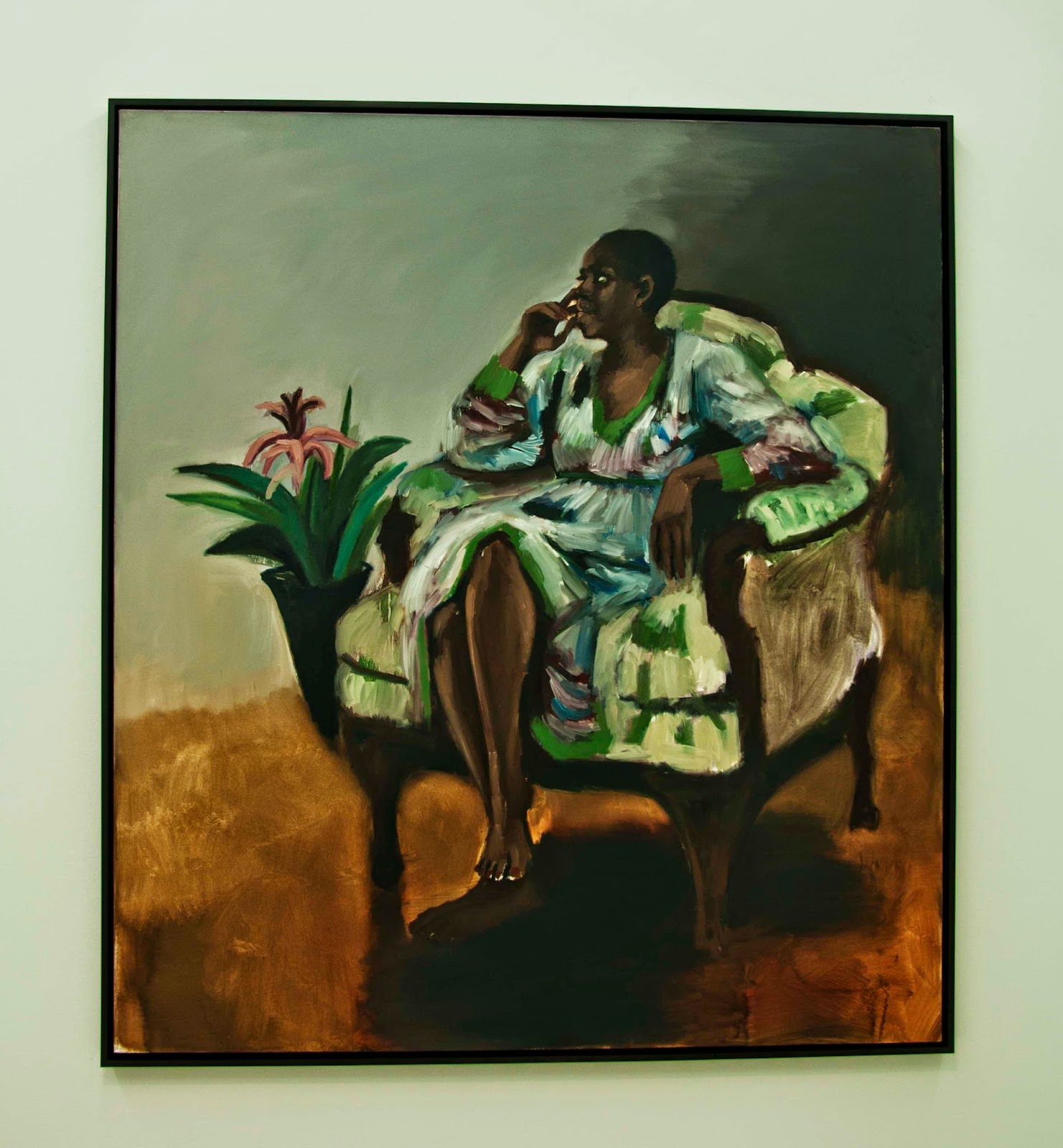