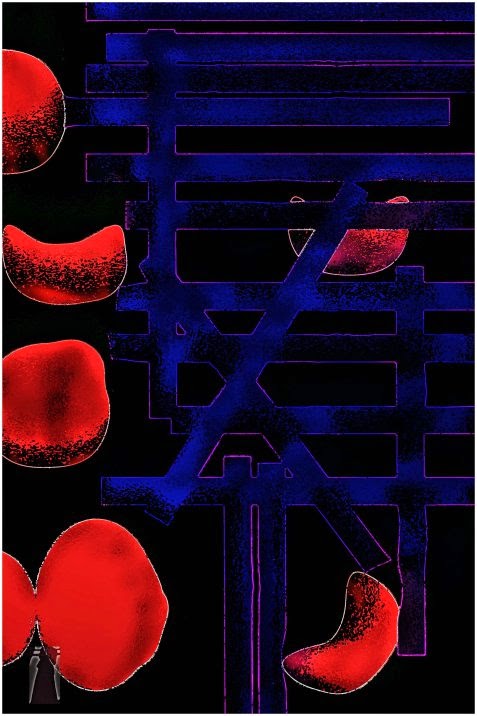 "Make it new," said Ezra Pound.  It is the answer to the excuse that everything has already been done. One can add to what has been done, or subtract from it, or divide it, or multiply it by something to create another perspective of it, and in so doing create something new.

In everything that I do, it is often my intention to be myself, whatever it is that this self is, I hope to reveal it to me through my actions, through my work. Though I am not always successful, I have known success in this goal and I am addicted to the feel of it.  I have been accused of "trying too hard to be different" when in truth, I only try hard to stay true to this self that I am eager to get to know; and not to sway to whichever way the wind blows. So in my work, I aim for newness. Yes, certain aspects of what I create has been done before, but what it is molded into is often a reflection of my imagination, my interpretation, and therefore, I would like to believe, different from what is already out there. I believe this is what most artists strive towards. There is a certain  feeling——that can only be experienced——when someone sees one's work and says, "this is different." That is an accomplishment of sorts. It means that one has been successful in "making it new."

It is very easy to relate to Beasley's thoughts in her essay "Nice Poem -- I'll Take it." Yes, the essay is old news, but it is new to me. And it is something that is currently on my mind.  A majority of artists struggle with that experience today. The issue is, therefore, relevant and significant.  In this age when someone could write a poem in Canada, and have it read by another in Australia, who is to say this person in Australia will not get away with putting her name on the poem(s) and selling it at  her local bookshop or something? It is very likely that our Canadian may never find out. The fear of seeing one's work somewhere with another's name on it is a nightmare. So how does it feel when one finds one's self in the grips of this horror? No matter how talented one is, to create something of significance, something new, takes effort. It takes time, it takes a certain degree of madness and much daring. One often has to expose oneself, and one never knows how others will react to the work. It is a risk in every sense.

A real artist would not be interested in stealing another's work.  It is too easy and too cheap. There is nothing in there. I have always felt that the significance of a work is during the creation of it. To not have this is to have nothing––to not have this is to not know the work. To some, art is mostly about fame  and wealth, but to the genuine artist, it is mostly about the work. To make the work breathe matters most: satisfaction is reached when the work is done and it meets the artist's approval. Ecstasy is reached when the work is categorized as an original and credited to the artist's genius.

In a sense, the work is the artist's narrative of her individuality. It aims to exhibit her difference; to invite all to sense as she does. Hence the work is done in her likeness as human is made in the likeness of its creator.* The artist's ownership is expressed in how Beasley's describes her recognition of her poem––which was shamelessly plagiarized by Christian Ward––with such familiarity and possessiveness; "With every draft I read aloud, I attested the words in my mouth. Salty, sweet, fatty, lean, velvet, metallic, mean. Mine. What does it feel like, tasting words you've stolen? Like sand, I suspect.  Sand that a man dying of dehydration drinks in the desert, never slaking his thirst." The artist knows the sinews of her work, for it is entirely of her molding. One who does not know the rawness underlining the work must not claim to own it. It is usurpation in every sense, and murder in an abstract sense.

* Reference to Grace Schulman's essay " The Story of the Creation Poet" in her book First Loves and Other Adventures.