April 10, 2013
Now on preview at the Stephen Sondhen Theatre is the new play The Trip to Bountiful by Horton Foote. Directed by Michael Wilson. The play is scheduled to open on April 23rd. I was watching a review of this play on NY1 during the past weekend and felt a curiosity to see Cicely Tyson on Broadway. It is quite a story that she wanted to come back to Broadway in a good play before she called it quit.

The stage for this performance is ingeniously done. The setting is Houston, then Harrison, then 'Bountiful'——all in Texas.  I went to the play without any expectation but the curiosity to see Tyson. The only place I have ever paid any mind to Vanessa Williams is in Ugly Betty,  where I loved to despise her. Here she is Jessie Mae, a bossy and self-centered wife. Still playing the heartless lady, though somewhat diluted, she nags and nags like a female dog and treats her mother-in-law (Tyson) without any respect. My friend thought that she played the role very naturally. And yet, I was hoping for a little something more. 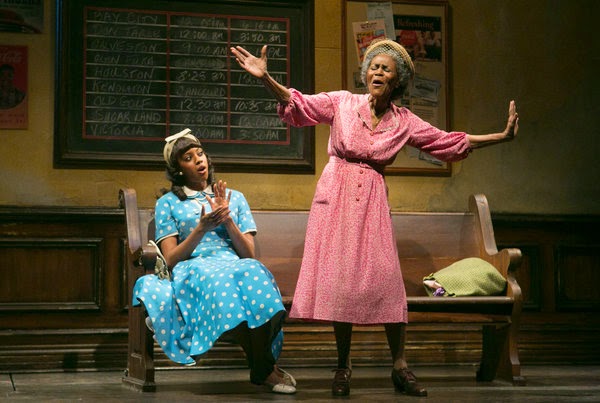 I wasn't impressed. Cuba Gooding JR's. performance as Ludie Watts could be narrowed down into a scowling man. I hate to be hard, but I didn't buy into his performance. There wasn't any genuine passion in his act. Even instances where dramatic passion was expected, all he managed was a tidy little scowl. Cicely Tyson as Mrs. Carrie Watts, of course stole the show. To see her run about on stage is a good laugh, and quite impressive. You are made to feel bad for her situation: stuck in a home where she is being nagged into heartaches and dizzy spells by an annoying daughter-in-law, and a spineless son who only knows to jump to the bidding of his wife.

Though I liked it enough, I must agree with my friend that the first act is weak. It is in the second act where things heat up. This is not surprising as the second act is mostly about Tyson's character and she was more frequently on stage; I wonder, though, if it comes too late. But then it is still in preview so changes might be made.

The starting price for tickets is pretty decent at $37.00!  Though if you can find a discount, it would be even better. It's a good play, just not an extraordinary one. Oh, be prepared to see a celebrity here and there, I spotted about two familiar faces but the only one I am able to place is Dulé Hill!

And since yesterday evening was so beautiful I had a fat shake in the middle of tourist-choking Time Square with my favorite boy in the world! My evening was made.