Broadway Play Review - Vanya and Sonia and Masha and Spike

March 20, 2013
This is the funniest of all the plays I have seen this year. Playing at The Golden Theater on 245 West 45th Street is Vanya and Sonia and Masha and Spike. Written by Christopher Durang and directed by Nicholas Martin. If you are up on your game with Chekov, this play will be probably funnier to you, but if you are like me, and are yet to begin the famous short stories, there is plenty of pop culture references that you might get; there is some Lindsey Lohan, Disney's Snow White, Angelina Jolie and there is this continuous mockery of Entourage, that HBO series. 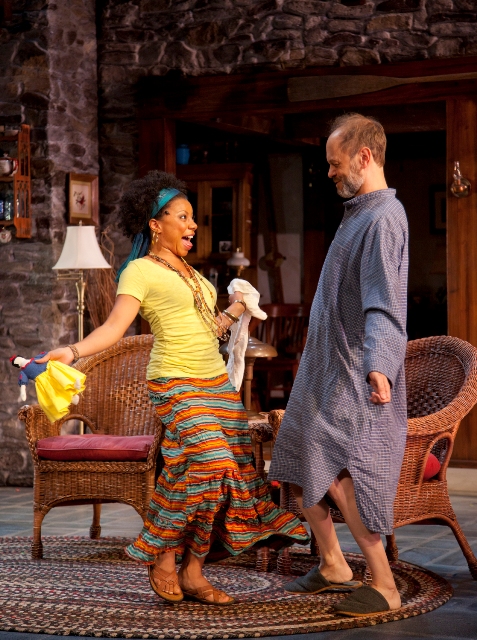 The setting is the present time in a stunning farmhouse in Bucks County, Philadelphia with views to die for, or so we are asked to believe. The stage is a masterpiece. I would live there if they would let me. The story is about three siblings: Vanya (David Hyde Pierce), the recent out of the closet brother. Sonia (Kristine Nielson)——Oh she is sooo funny—— the adopted daughter who might be bipolar, and who kept claiming that she has not lived at all. She calls herself a wild turkey. There is Masha (Sigourney Weaver), an accomplished actor. The very opposite of Sonia. Masha also owns their home. Cassandra (Shalita Grant) is the housekeeper who keeps predicting their doomed futures. She also knows how to work a voodoo doll. Then there is Spike (Billy Magnussen), the dimwit boy-toy who teases everyone, and is  allergic to clothes. Nina (Genevieve Angelson), is the beautiful young woman whose love of the the theater makes her seek out Masha. But Marsha finds her threatening; for she makes her feel old. Everyone but the housekeeper is to attend a costume party, the preparations for the party and what goes on at the party as well as the scenery surrounding the house is what the story unfolds around.

I am glad I was lucky enough to have seen this play.  If you want more word on the performance, see the New York Times and the  Huffington Post. And happy happy happy first day of spring!!!!!