January 08, 2013
Right before Christmas, I was working on my biggest scarf order till this day. A cool lady customer ordered it for her boyfriend. I wanted to fixate my eyes on something as my hands did their thing. At the moment, I only watch Fringe, Spy, and Hart of Dixie on Hulu. And I had seen all the latest episodes. As I went searching for something else, I stumbled on Lost in Austen! I was immediately curious. I had been reading Pride and Prejudice for a final paper, so the story was fresh in memory. And the title sounded familiar. 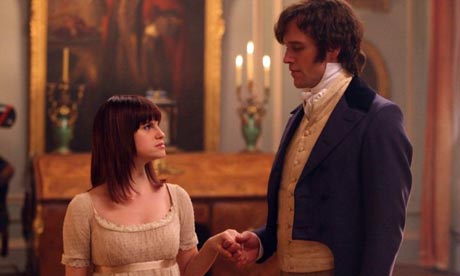 If you haven't seen this yet, you probably would want to! I found out later that the show came out in 2008! Imagine that!  The whole thing was on both Netflix and YouTube! Lost in Austen is a treat for Pride and Prejudice lovers and haters both! It's a four series show, and unlike me, you are able to watch all of it together! I had to wait, so painfully, and eagerly to see an episode every week!

Warning, it doesn't stick to the original storyline, even from the very beginning. There is a twist to the story that is familiar, and yet ingenious. We've all seen those go-back-in-time narrations, and know how they go.  Often the character who goes back replaces the original character. This is not the case here. Jemima Rooper, as Amanda Price is hilarious. So you say, "Wait! There's no Amanda Price in Pride and Prejudice!" My answer is "exactly!"

You know how female readers fall in love with Darcy and want to go back in time just to waltz a night away with him?! Well, this show does well to remind its audience of the time difference. What women could do then and what they can do now is literally centuries apart.  Imagine a woman wearing pants in 19th century England! Imagine Caroline Bingley, a lesbian, and Mr. Wickham a hero. Gasp!

I won't spoil it for you any longer but it is delightfully topsy-turvy, and you are going to love it! I am certain you will. I think I'm going to see it again in a week or two.  It's likely that you've seen it already, but if you haven't, do knock yourself out!