January 10, 2013
Before we hop on this little carriage, you must know that I was 17 minutes late to the play. Embarrassing? Yes, but what's more embarrassing is that I was on time at the wrong theater. This has been a week where a majority of what I do is either backwards, uncomfortably too early, or just really weird. But I am finding it all amusing.

Picnic is currently previewing at the American Airlines Theater on 227 West 42nd Street. It will open this Sunday the 13th of January and close on the 24th of February. Ten days after Valentine's day. I think this is a perfect play for Valentine's day, but ah, what do I know. 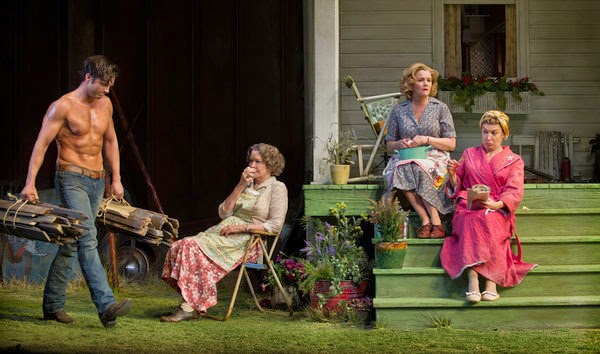 To it then. Set in the front yard of a home in Kansas city, in the 50s.  The play highlights the relationship between a pretty sister Medge (Maggie Grace) and an intelligent sister Millie (Madeleine Martin). Medge's got the town's men in-love with her. And Millie is of course, jealous. They live with their Mother  Flo (Mare Winningham) and share the lawn with an older woman, Mrs. Helen Potts (Ellen Burstyn) and her mother. Which begs the question what happened to their husbands and their father?  The Second World War had just ended. That did take away many husbands and fathers. But perhaps this was explained in that 17 minutes that I was not there. There are no men in the house. They have a tenant, Rosemary (Elizabeth Marvel) a teacher at the local school. Men are significant in this play. They seem to have left their marks on the older women, and one in particular get the young women going wild.

Be prepared to see some fantastic muscles and abs when Hal (Sebastian Stan) takes of his shirt. I suppose it makes sense that Rosemary, though older than Hal, thought she did like a piece of Hal too. There's a lot to Rosemary that we don't get to understand, even when sober, there's something odd in the way that she carries and expresses herself. Then under the influence of alcohol, we see that she is desperate to be married. She is not happy being some school teacher. She thinks of herself as an old maid. Not surprising for the stereotypical state of mind of that time period. They were unkind to the unmarried woman, for a woman's worth was measured by marriage and children.

Medge, already in a relationship with the sweet young man, Bomber (Chris Perfetti), could not ignore Hal, with his booming voice and wild 'manly' ways, though a bum of sorts. He seems violent, and yet when he has a reason to be violent, we see that he is not so. He is just loud. Medge and Hal falls in love, and Medge must choose. The educated and safe Bomber, or the wild and spontaneous Hal with his great abs and great boots?! I believe you know the answer.

I loved the performance. I especially was captivated by Rosemary, the teacher. She did get herself married in the end. In a most conniving way: amusing but very sad. This play is worth your $42 dollars (Tickets start at $42.) I hope to see it again if I get the chance. (Chance here means for free.) It's a good story and the cast carries things off pretty well.
-
Jane
Theatre