May 23, 2012
Showing at the Duke on 42nd Street between 7th and 8th Ave, is Cock. The new Off-Broadway play by Mike Barlett. A very intriguing, insightful, and captivating piece. 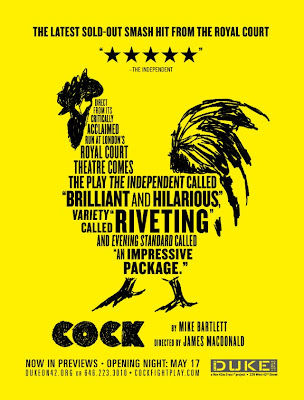 One thing you ought to know before you join John (Cory Michael Smith), M (Jason Butler Harner), W  (Amanda Quiad), F (Cotter Smith) and your fellow audience is that if you are one to never be on time, this is one of those shows where you really ought to make it on time or just forget the whole thing. If by some luck you are able to get in,  after you arrived late, it would be awkward to get to your seat. The sitting arrangement is quite intimate, like a small gathering of friends. Every eye will follow you, including those of the actors. They are in the middle of a green floor and you would be part of the small circle that surrounds them. There are no barriers. The audience eyes does not only follow the performers but those sitting around them––good way to observe the impact of the play on those around you.

Cock is about the young indecisive John who finds the need to separate with his long time eccentric and painfully emotional partner M, with the claim that they are too different. During the brief separation, John meets W and finds out that he can also be attracted to women.  This leaves John more confused than he was previously.  And the confusion escalates when he pursues a relationship with both M and W on a strong foundation of lies.  In the end he had to make a decision. But I found his decision unsatisfactory. Clearly, the best thing for John is for him to find out who John is without twitching under the molding hands of some lover, eager to shape him into whatever pleases them. The play highlights how confusing bisexualism can be. It was indeed nerve racking watching John figure out what and who he is. In not knowing, he hurts those who love him and himself constantly.
-
Jane