August 06, 2011
The best musical I saw this year.  I am not being dramatic.  I promise.  It was really good.  I've been hoping to see Memphis for a while now, but my secret and currently only affordable way to Broadway shows couldn't come up with the tickets until this Wednesday.  It was worth the wait. 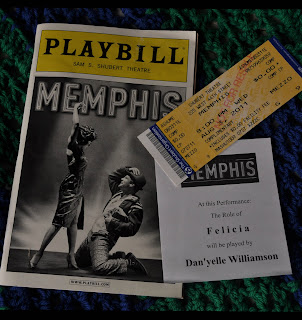 The music was fun, full of life and most inspiring.  The acting was believable: Chad Kimball (Huey)  was rather impressing. I found him mostly amusing when he converses with his mother and later his boss.  The theme could easily be phrased "music unites." The story is about a caucasian who loves soul music and crosses the borders of society into an African American neighborhood to listen and sing with them.  He is uneducated but he has a great ear for music and this talent takes him far.  He becomes a presenter at a radio station and he brings with him his African American musician.  He falls for an African American woman but the law prohibits their being together.  The rest of the story narrates what Huey and Felicia (Dan'yelle Williamson) endures as a couple, and the significant part that music played in their society.

The funny thing is that the theater wasn't full.  According to a friend who spends a lot of time buying tickets for Broadway shows, a ticket to Memphis is always hard to get.  So I was a bit shocked that it wasn't a full house. I watched the musical from the mezzanine, not a bad seat.  I'll choose the mezzanine any day over the back of the orchestra.  What I love about seeing a show from the top is that it matters not if you find yourself behind a long-necked fellow. You are all looking down!
-
Jane