July 11, 2011
By Thursday I had had enough of my so call anti-social week.  A little persuasion from my boyfriend  landed me in Time Square (an awful place to be if you want to get away from people) to see Hair.  I love Broadway but I am not a very big fan of musicals.  The first musical I saw was Phantom of the Opera and though I liked it, I wished the intermission would have been the end of it all.  They all sound the same to me. All that singing.  Now, plays are something entirely different.  I think the most boring play I saw was The Milk Train Doesn't Stop Here Anymore and I still loved it.  I don't care how bad a play is, I can stand it. I can laugh at them or laugh with them. With musicals I can only laugh with them or yawn at them. 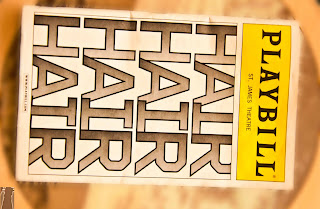 Back to Hair, I read some pretty good stuff about it from the NY Times so I was hopeful.  It was not for me. They were really engaging, had great stage presence and were all over the audience.  I even got a real flower and there was some nudity and controversial messages about war and drugs which is a bit relatable to the present.  The setting is 1967 and the title is very appropriate since the characters are part of the Hippie Movement and together have plenty of hair to keep a bear entirely covered.  I enjoyed  Steel Burkhardt's (Berger) introduction performance: his hopping around and running his hand through the audience hairs. I guess I would have really liked it if I were not tired. I was coming from my internship and also from shopping for fabric.  I think the best musical I saw this year was How to Succeed In Business Without Really Trying. Daniel Radcliffe was hilarious.

It was not a bad musical.  I have seen worse, and most of the audience seem to really like it.  What messed it up for me was the acting.  I found it disappointing. But of course, do take this with a grain of salt because like I said previously, I am not very big on musicals.
Theatre